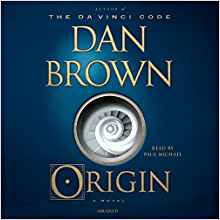 Origin is another Dan Brown novel featuring Robert Langdon. Brown really hit a home run with the creation of this great character.

Langdon is everyone’s favorite professor, which gives Brown the opportunity to pontificate. He’s the voice of reason in situations that are usually very unreasonable, and even as he ages (Brown doesn’t tell us how old Langdon is), he’s a bit of a babe magnet. He’s also the kind of physically fit even young guys dream about.

In Origin, Langdon’s former student and friend Edmond Kirsch has announced to the world a new scientific discover that will produce a paradigm shift. But, of course, unexpected events intervene. I can’t tell you without giving an important plot point away. This leaves Langdon and the beautiful Ambra Vidal, director of the Guggenheim Museum in Bilbao and the fiancé of the Spanish heir to the crown, in a race against time to find Edmond’s secret and release it to the world. Langdon and Vidal are aided by Kirsch’s associate, Winston, whom readers will no doubt love.

Brown is often at his best when his characters are arguing for or against religion—or both—and Langdon is occupying the middle ground. This, too, in this novel, was a bit ponderous, slowing the story down, but the arguments were enjoyable in and of themselves.

What I found most intriguing about this story is Brown’s examination of the way humans now live their lives in public and online, how manipulated news and conspiracies rivet our attention, and how we have become more willing to accept those stories—and the outrage they often provoke—rather than wait for and weigh—all the facts.

Brown also reminds us to ask ourselves where are we going with artificial intelligence and urges us to bear in mind that computers are amoral. He asks readers to consider the place of religion in developing or instilling a moral compass in humans, and how science and religion can coexist and why they should.

My favorite line in the book comes near the end. Ambra Vidal, has had her trust in her fiancé shattered. She doubts she can regain that trust. But Langdon in his clear-headed way, urges her to wait until she has talked to him and has his side of the story.

When she is skeptical, Langdon in the gravel of a garden walk, scrapes out between them the Roman numeral equation: I + XI = X. He asks if it’s true or false. She says it’s absolutely false. He asks if there is anyway it could be made true. She says no. He gently tugs her to his side so that she is looking at the equation from the opposite direction: X =  IX + I. “Sometimes, all you have to do is shift your perspective to see someone else’s truth,” he tells her.

Re-Embracing the Art of Idleness.