All her life, she’s denied her Second Sight. Now it just might save her life. 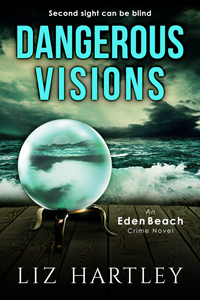 Stacie Cappella just wants a normal life. Instead, her eerily accurate—though unpredictable—gift of Second Sight, inherited from her eccentric, fortune-telling great aunt, has given her a lifetime of embarrassment, shattered friendships, and broken hearts. She does her best to keep her inconvenient hunches to herself. But even something as simple as selling wind chimes, crystals, and tarot cards at her shop, The Bell, Book and Crystal, has opened her to charges of witchcraft.

Then the belligerent wife of a powerful city council member accuses her of fraud.

Eden Beach Police Detective Ben Robard, a jaded Iraq war vet and skeptic of all things metaphysical, is reluctant to take on the frivolous fraud investigation, especially since a serial killer may be targeting his city. Despite signs the no-nonsense cop is the love her aunt foretold, Stacie is determined to keep a fence around her heart—and a tight rein on her intuition.

But one chilly morning, a nightmare steps out of the fog, and Stacie must risk revealing her gift to convince Ben she’s in danger. It’s a move that could save more lives than hers—but could lose her the chance at love she thought she’d never have.